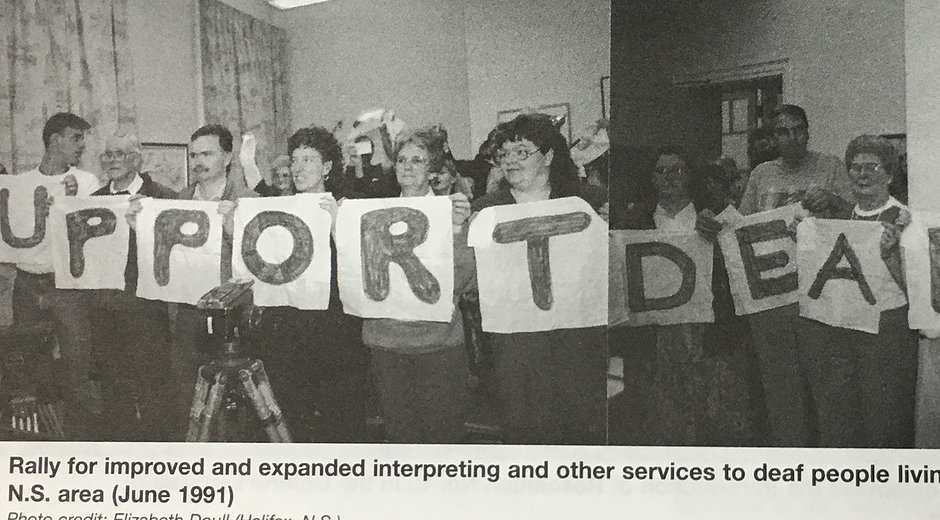 Until the late 1970’s there were no professional Interpreter services or other services for the Deaf in Nova Scotia. Communication was solely provided by family members or friends. It wasn’t until 1980 when “Metro Services for the Deaf” opened in Halifax with funding from the Nova Scotia Department of Community Services. These services were restricted to the Metro Halifax area.

In 1983, an Assessment Hearing Impaired Research Report was completed and it was felt that a Resource Centre in Cape Breton would alleviate many of the needs and concerns of the Cape Breton Deaf.

In June of 1987, it was agreed that the “Metro Services for the Deaf” was to change its name to be inclusive to more areas across the province. Thus, “The Society of Deaf and Hard of Hearing” was established.

In 1988, the government agreed that if there were enough Deaf residents in Cape Breton then they would be willing to give money to warrant local services. Upon this research, the government decided to reject the funding for a local office.

In June 1991, Deaf Cape Bretoners and their supporters went to Halifax to vent their frustrations regarding the government’s refusal to have interpreter services provided in Cape Breton (see above).

In September 1991, funding was finally received from the Department of Community Services and the Society of Deaf and Hard of Hearing Nova Scotians – Cape Breton affiliate was born. It was first located in the Red Cross building at 122 Charlotte St, Sydney. At the time, the office consisted of one Regional Manager (Rosalind Wright) and one Interpreter (Laurie Bedford). Since then, our office has been gratefully supported by many staff members and is now represented through the continuous work of Rosalind Wright, and Clare Le Blanc (Interpreter).

In December 1994, the office was relocated to 56 Nepean St, Sydney.

It’s been 29 successful years of providing services for the Deaf community of Cape Breton. We are very thankful for the friends that we’ve made and the memories that we share. Thank you to our members for supporting us along our journey.

To check out our current location, visit us on 762 Victoria Rd, Sydney, N.S.